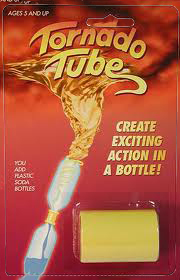 As an inquisitive young boy, Craig Burnham invented the TORNADO TUBE® as he experimented in his parents’ basement.

Fifteen years would pass before Craig sought for and received a patent for his science toy. Since its debut at the New York Toy Fair in 1988, the TORNADO TUBE® has become increasingly popular and sells worldwide!

Partially fill with water one of the 2 two-liter size plastic soda bottles.
Screw the bottles into opposite ends of the tube
Tip, so that the full bottle is on top and give it a circular starting whirl. Presto! You have a vortex. Call it a tornado if you’re a meteorologist, or a whirlpool if you’re into oceanography.